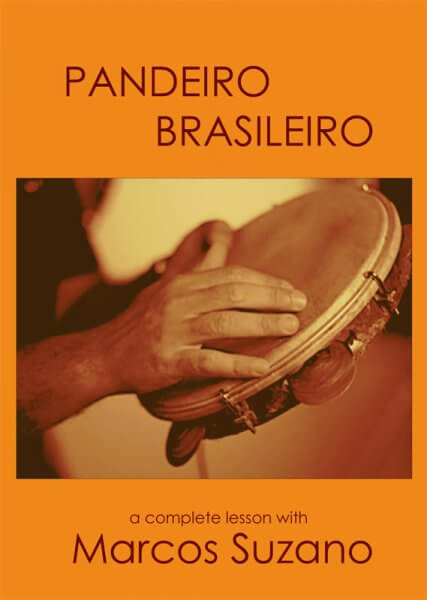 In February 2008 we recorded our first Kalango in-house production DVD! We travelled to Rio to meet Marcos Suzano - what a great musician, personality and pandeirista! Marcos created a true renaissance of the pandeiro. Marcos Suzano has become a worldwide legend amongst pandeiro professionals in the past decade, he is considered an innovator by launching his absolutely unique way of playing the pandeiro, combining traditional with modern techniques. By introducing his very own teaching techniques, he has not only inspired a whole generation of pandeiristas - beginners and top-class musicians, but he has therewith initiated a worldwide pandeiro boom, making this fantastic little allrounder instrument even more popular and pushing its borders toward new horizons. Whoever has experienced one Marcos Suzano's concerts or workshops, knows how downright spellbound the effect of his enormous virtuosity, musicality, creativity and last but not least great sense of humour is.

Kalango recorded this course with him under own production in 2008, join the pandeiro revolution and check out more than 20 Brazilian Rhythms under professional instruction.
The DVD has a small booklet with scored and explanation for hand-setting for your exercising.

This DVD will introduce you well to Marcos Suzano's playing technique. Besides showing the basics, Marcos presents a nice line-up of different grooves and patterns. Check out how his musical ideas pour into his pandeiro and how creative he plays it. If you are a stage pro or like going experimental, you won't go away empty-handed. Marcos provides you with tips for professional usage of microphones and effect technology. Go for more - the pandeiro is a lot more than just a small frame drum!

Great explanation by one great musician. learning a lot of new things about pandeiro. Thanks Marco

I am a beginner with the pandeiro and percussion in general. This DVD gives clear instruction in English, is easy to follow, and has clear examples of the many rhythms used in choro and other Brazilian music.

€246.00 *
Compare wishlist
Would you like to learn more about our instruments?