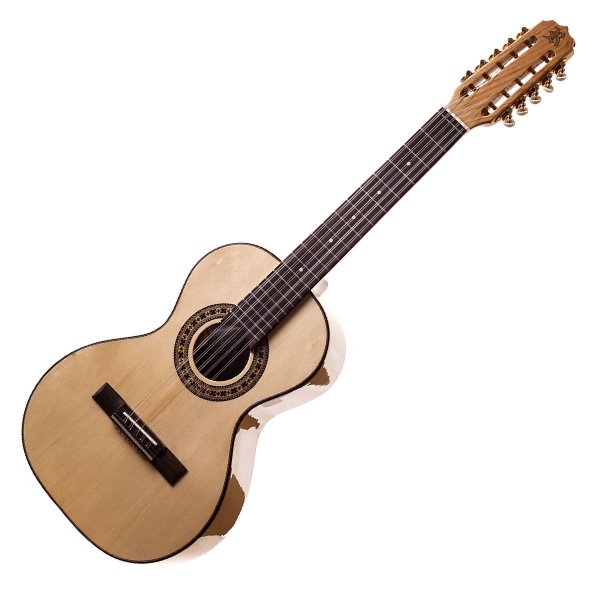 The viola cinturada dourada by Rozini is the waisted, slimmer version of the viola caipira and is an important part of the range of exceptional Brazilian instruments.  A 10-stringed folk music instrument from the central south of Brazil with 5 courses of strings arranged in pairs, the second 'empty' resonating string that are often found on lute instruments. There are a variety of different open tuning options for the viola caipira (see examples below). Made of quality woods, with an active pickup, brilliant sound characteristics and crafted details like the real-wood mosaic make this viola an absolute favourite and extraordinary piece.

Caipira means 'boy from the country' (caipirinha is the girl from the countryside). The viola is typically plucked, you might see musicians using finger pick rings rather than normal plecs. Also common are nail extensions, as known from Spanish guitar music. The origin of the viola is not entirely clear, many stories are entwined around its roots; one suspects its origin from the post-medieval north of Portugal, where it bears a great resemblance to baroque 10-string lutes. This is probably how the viola made it to Brazil, imported by immigrants. The viola caipira has unofficially acquired the secret status of the Brazilian national instrument, only surpassed by the small all-round instrument pandeiro, which is now played all over the world. The viola caipira has also secured a place for itself in the modern music world.
Well-known artists are or were Almir Sater (traditional & pop), Andréa Carneiro, Helena Meireles and many more. only 1 article(s) left
€537.00 *
Compare wishlist
This might also interest you
Would you like to learn more about our instruments?