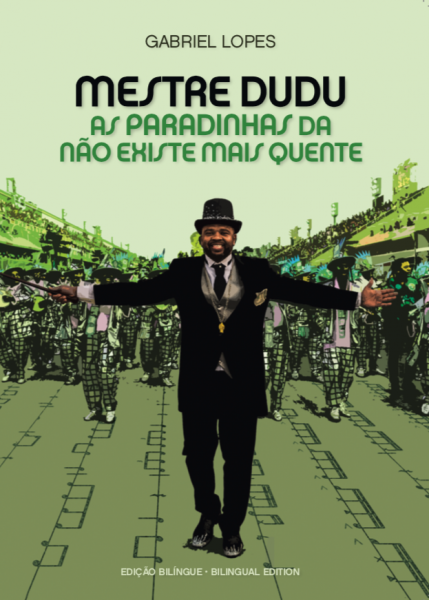 Sambistas will love this book!
Play just like the Samba schools in Rio! Who doesn't dream of playing authentic breaks and sounding like you're just entering the pasarela. This collection of paradinhas is Gabriel Lopes' second music book that focuses on the transcription of the 'bossas' (or 'paradinhas') - the bateria breaks that go with the Samba de Enredo, this time focusing on the Samba school GRES Mocidade Independente de Padre Miguel. Bossas is a Portuguese word for the breaks that the baterias of the Samba schools play at the carnival at the Sambodrom in Rio de Janeiro. You can watch and listen to all bossas from the book in the videos above.

Mestre Dudu:
Mestre Dudu has been the musical director of one of the most famous baterias of the carnival in Rio since 2012 (still at the time of the book release in 2020). Carlos Eduardo Arcanjo de Oliveira, known simply as Mestre Dudu, has dedicated more than half of his life to the Samba school Mocidade Independente de Padre Miguel. Since he started at Mocidade as Mestre de Bateria, he has focused on his work to preserve traditional characteristics of the bateria. With this concept he managed to receive the highest score for his bateria, which was last achieved in 2002 under the guidance of his own father Mestre Coé. It was only under the direction of Mestre Dudu that Mocidade's bateria once again managed to win the much sought-after special prize "Estandarte de Ouro", awarded by the newspaper O Globo.

You may have met Mestre Dudu on our site before, he recorded most of our product videos for Ivsom instruments for us!

Gabriel Lopes / Author:
Gabriel Lopes is not less known in the Samba scene of Rio! He is a musician since 2001 and since then he has been working as a musician and percussion teacher for the band Monobloco amongst others. With Monobloco he recorded 4 albums and 2 DVDs, went on international tours and participates as an active musician in the infamous street parades with 10.000s of people. He is also the founder of Bloco Volta Alice, whose bateria is a good 100 wo*men strong. Through Volta Alice and Monobloco he actively participated in the renaissance of street carnival in Rio de Janeiro in the early 2000s.

€42.00 *
Compare wishlist
Would you like to learn more about our instruments?