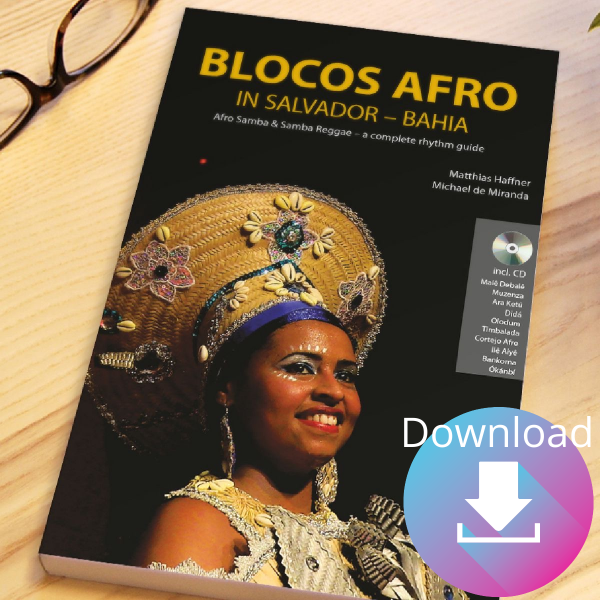 A book loaded with information about history, origins of Afro-Brazilian music styles, blocos, sound sambles including sound samples and written music.
The music of the Blocos Afro has become so popular over the past decades, their rhythms inspire not only Samba groups and but also influence professional musicians and bands around the world. Little literature is available, and certainly no transcriptions, as the rhythms are usually passed on orally within the bands.
Matthias Haffner and Michael de Miranda have managed to extract the essence of the Blocos Afro and put this information together in a book. In this download version, you will get pdf files with the content of the book, the music and the photos of the author’s travels to Salvador da Bahia in Brazil. The Ebook includes soundfiles for rhythms of each Bloco Afro, listed by instrument. If you are looking to educate yourself about the backgrounds of the north-east Brazilian afro-blocos, this Ebook is a great way to get a broad overview. Being experienced professional musicians in mainly Latin music genres, the authors have captured many almost invisible connections between the many Caribbean styles, amongst others, and the Brazilian influences.

€4.00 *
Compare wishlist
Would you like to learn more about our instruments?